The Orange County Legislature adopted a new County Comprehensive Plan in May 2019.  This new Plan replaces the 2010 Plan but retains the five supplemental chapters: Open Space Plan, Water Master Plan, Greenway Compact, Agricultural and Farmland Protection Plan, and Economic Development Strategy, and adds a sixth supplemental chapter focused on transportation. These documents are a useful resource for elected officials, planning and zoning board members, and the citizens of Orange County who are interested in being involved in steering the future of the County’s landscape.  The Plan and its supplemental chapters can be accessed by visiting www.orangecountygov.com/planning 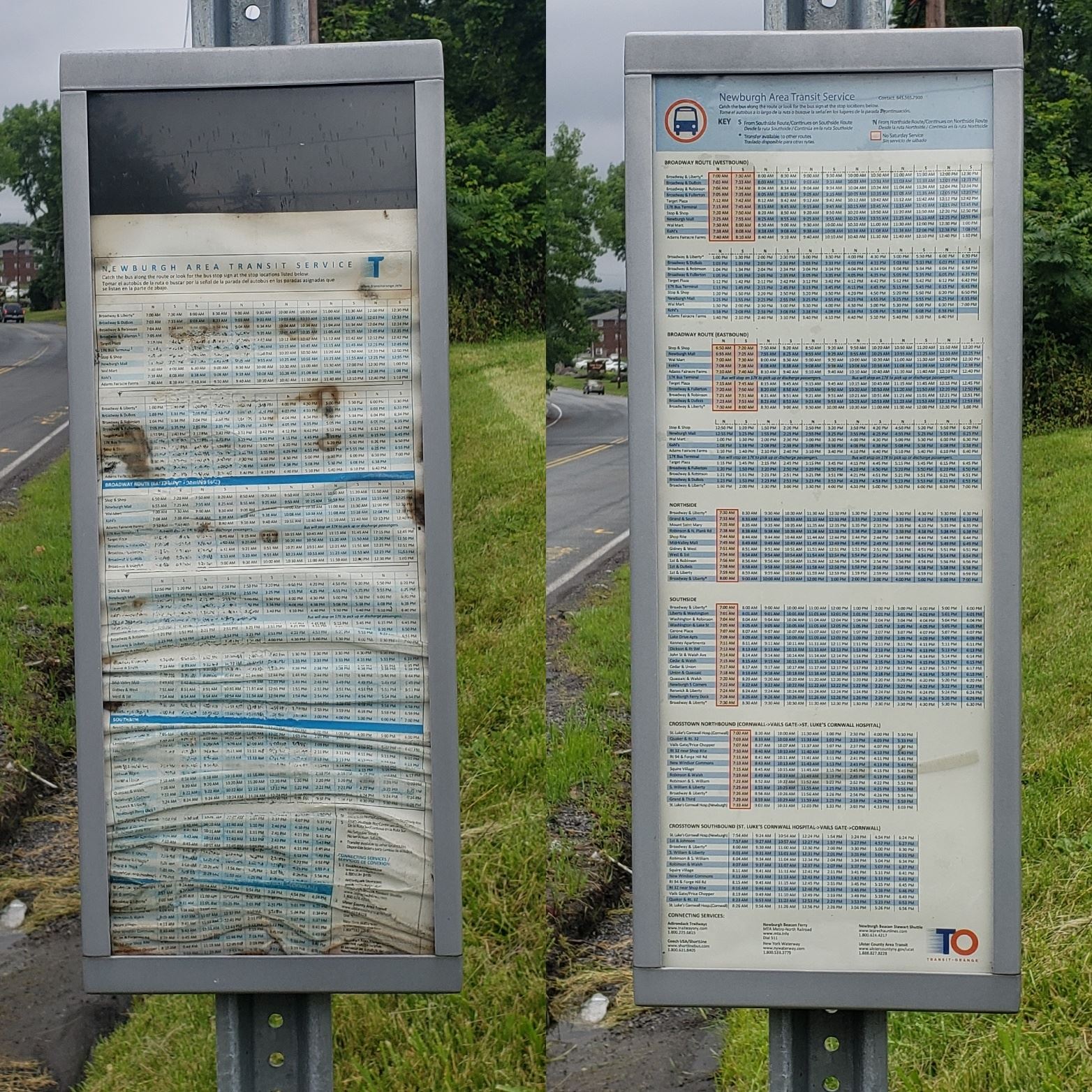 Transit Orange is happy to announce that the schedules at each Newburgh Area Transit bus stop location with previously posted schedules were replaced on Tuesday, June 26, 2019 with fresh new ones.  Orange County Planning Department staff were happy to assist in this much needed improvement, as seen in the accompanying before and after picture.

The Orange County Commissioner of Planning, Dave Church, was recognized with the Louis V. Mills award by the Orange County Land Trust (OCLT) at their annual benefit event on June 7th.  The award, named after Orange County’s first County Executive and a founder of the OCLT, was given to Dave due to his long-time advocacy for land conservation and for his support of the OCLT.  Dave led the development of the County’s first Open Space Plan, which was adopted as an addendum to the County Comprehensive Plan in 2004, and oversaw the County’s open space fund from 2004 – 2006. During those three years, the County open space fund was used to match municipal, non-profit, or other funds to preserve over 2,300 acres through conservation easements or direct acquisition.  Congratulations, Dave!

The Monhagen Brook Watershed Plan was finalized in January of 2019 and is available online at http://waterauthority.orangecountygov.com/monhagen.html.  This Watershed covers portions of the City of Middletown, the Town of Wallkill, and the Town of Wawayanda. The project was a collaboration between the Orange County Water Authority and Orange County Soil & Water Conservation District.  The Plan recommends strategies – many being site-specific – for protecting and enhancing this Watershed and for identifying and remediating sources of phosphorus pollution. Print copies can be made available by contacting the Orange County Water Authority at 845-615-3868.

Next year, the United States will undertake the decennial Census of Population.  Learn why the Census is important to you.  Read more here...

There are currently no events planned.

The Orange County Planning Department's newsletter, The Resource, is an informative publication for municipal leaders, board members, and interested citizens. It is our goal to make an accessible, easily navigable, and overall enjoyable experience for our readers.  If you would like to receive our updated newsletter, please subscribe to our emails here: The Resource e-newsletter

You can find previous editions of The Resource in the archive center by clicking the link.