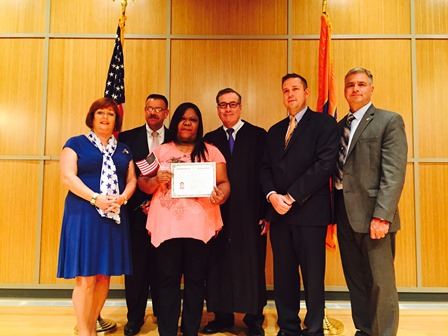 The County Clerk’s Office hosts naturalization ceremonies throughout the year, in conjunction with Department of Homeland Security, (Citizenship and Immigration Services).

The public is invited to attend. Ceremonies held at:

Please plan to be at the ceremony for two and a half to three hours, feel free to invite family and bring a camera.

About the Naturalization Process

Through this process a foreign citizen or national fulfills the requirements established by Congress in the Immigration and Nationality Act. This act requires that an applicant for citizenship must reside in the United States for a period of time, had the ability to read, write, speak English and have an understanding of United States civics, demonstrate good moral character and have attachment to the Constitution.