World War One Centennial Exhibit
During the centennial period of U.S. involvement in the Great War (April 2017-November 2018), staff at the Office of the County Historian conducted extensive research on the local men who served overseas including the 107th NY Regiment and the 369th NY Regiment, highlighting exhibits and presentations on related topics and cumulating with a trip to Belgium and France to memorialize the battle site where more than 40 Orange County men died on one day at the Battle of St. Quentin Canal.

A photo exhibit of 50 images is displayed on the 3rd floor of the Orange County Government Center showcases the trip which followed in the footsteps of the 107th New York State Infantry Regiment overseas. 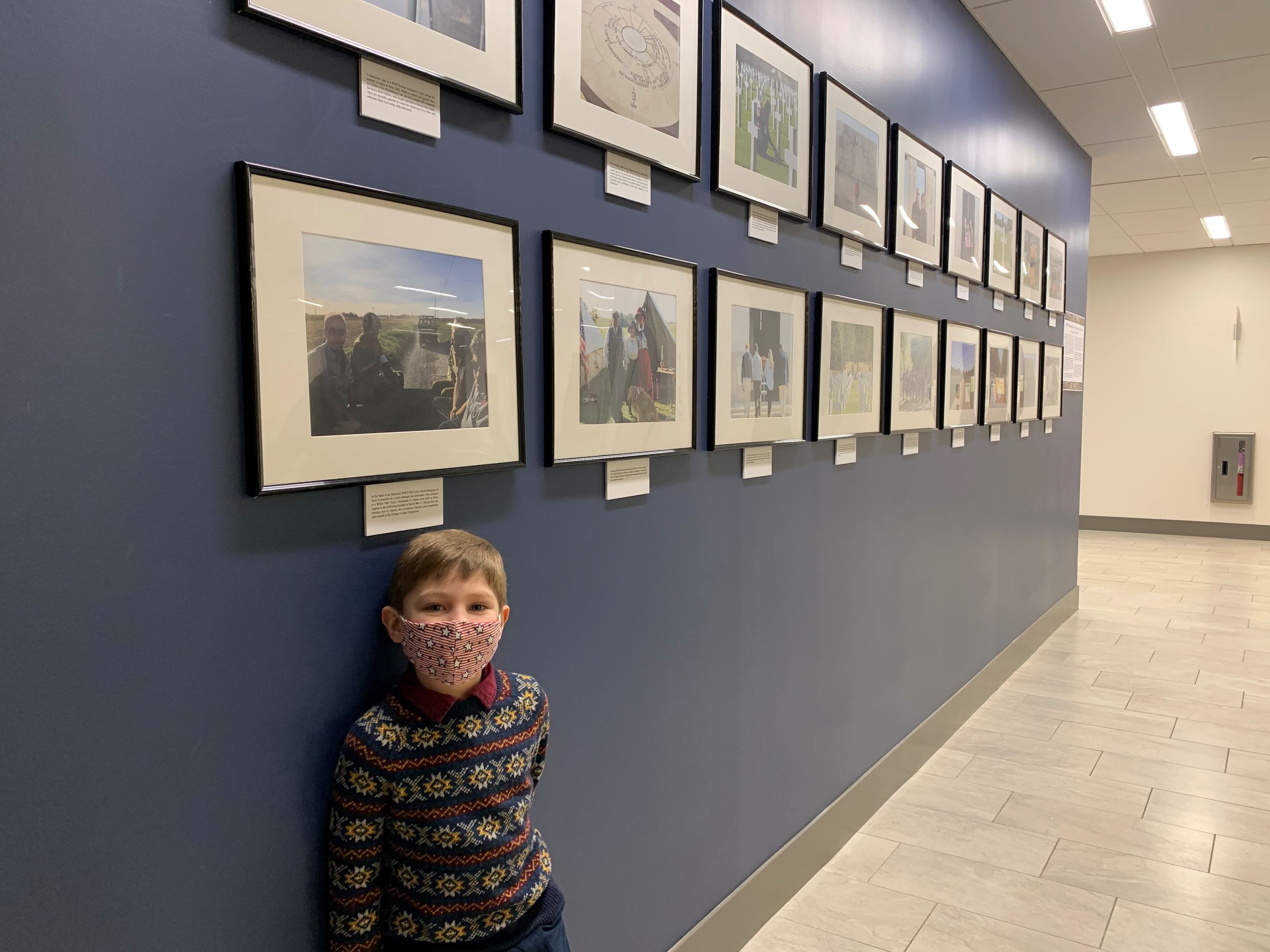 Walter Allison, a graduate of Newburgh Free Academy probably did not know what hit him when wounded in the stomach on September 29, 1918. He lay in a shallow shell hole, bleeding, not far from where his commander lay mortally wounded. Two lieutenants urged the men of E Company of the 107th Infantry Regiment on, but they too were cut down, as bullets ripped through the air, shells exploded all about them wiping out an entire squad and Allison's classmate Everett Baker. Smoke and chemical gas drifted through the air as the few remaining sergeants, corporals and privates carried on the fight, and the brutal battle to break the Hindenburg Line continued.

One hundred years since that day, we remember the steadfastness of the Orange County soldiers who offered their lives to break the formidable German defensive line in a daylong battle that, though filled with unforeseen mishaps, saw bravery to the highest degree. The historical record showed that the soldiers from Orange County who died as a result of that terrible day numbered around forty, but now, thanks to additional research, six more names have been identified, bringing the total to forty-six.

Standing (left to right) are Cyril Engelbride, Sterrit Keefe, Howard Rogers, Bernard Martin, Walter Allison. In the lower row are John T. Kenney, Edward Shay and Arthur Leghorn. All five of the men in uniform were killed in action in France.

So much has been written about America's wars, and from WWII onwards remains within recent memory, yet the further back along the timeline we go, the bravery and resiliency of our soldiers in WWI fade further into ancient history. We, as a nation, especially in this centennial year, cannot let this be. Come this September, we invite everyone: citizens of Orange County, the descendants of those from that Battle and WWI; from the Hudson Valley, the State of New York, and beyond, and especially our honored Veterans to join us and visit these battlefields. We will lay a wreath at Flanders Field in Waregem, Belgium, not far from where they experienced their first combat action. We will lay another at Somme American Cemetery at Bony, France, to remember those who gave their all in one of the most brutal battles of the war, where after fifty-six hours of heavy fighting, hundreds of New York State soldiers lay wounded, dead or dying. What at first seemed like a failed effort, actually helped turn the tide of the war, with Germany surrendering soon after, on the 11th hour, of the 11th day, of the 11th month of 1918.

Frank Licameli, an independent military historian from Orange County, explains, "In the Spring of 1918, the Germans were aware that many American troops would soon be coming into the war to fight alongside the Allies (made up of the United Kingdom, France, Russia, and Italy). The Germans pushed their offensive as far westward as they could, to within 40 miles of Paris, and captured as much land as possible. By summer, the Allies, now with a growing contingent of American forces, turned the tide and were slowly pushing them back. The Germans gradually retired to their 'impenetrable' defensive line, named for German Field Marshall Paul von Hindenburg. The Hindenburg Line was a massive defense in depth, with reinforced concrete bunkers and trench lines, fields of barbed wire, machine gun nests, and minefields. It formed a 400-mile line, stretching from Belgium in the north, across eastern France, and to Switzerland in the south." Breaking this line would puncture the morale of the German army, create access into Germany, and hopefully, bring a conclusion to the war which had been raging for four years.

Allison and Baker were members of one of the county's National Guard companies, two from Newburgh and one from Middletown, that were called into service in 1917. During training in South Carolina, these units were folded into what became the famed 107th Infantry Regiment of New York's 27th Division. Upon arrival in France in late May 1918, they trained for close combat. They learned trench warfare techniques and how to work closely with tanks. Unlike most American units that fought directly under General John J. "Blackjack" Pershing, they would be fighting under British command, and so were outfitted with British weapons and equipment, and rations. After transitioning into front line combat in Belgium, these American soldiers were ready to do their part in what would become known as the, "Hundred Days Offensive."

In late September, they were transported to within a few miles of the front near Allaines, France. Orders came down from division, through the regiment, to the battalions, and finally the companies. They were given their objective - break through the Hindenburg Line at all costs. They were finally going "Over the Top." There would be no stopping to care for wounded, clear trenches, or take prisoners. Others would handle that. Their mission was to keep moving forward. The next night they tramped in silence past the village of Ronssoy and edged to within a few hundred yards of the German lines. Through the next day, they tried to rest in sunken roads, trenches, and shell holes while German gas and explosive shells landed among them. And they waited, and it rained. Artillery batteries set up just behind them. If they dared to look through the smoke and mist, they could see the rolling fields they would cross to the German outpost line between two German strong points, the "Knoll" on their left, and Guillemont Farm on their right. More than a mile away, was the main Hindenburg Line, beyond which they would cross over and pass the ridge at the northern entrance to the three-mile long St. Quentin Canal Tunnel to their objective. The canal, which flowed through a deep gorge just behind the Hindenburg Line, was a huge obstacle. If they could break through here, tanks and equipment could stream over the tunnel ridge and get behind the German lines. They waited. The "stunt" as the soldiers called it, would begin that morning, Sunday, 29 September. At twilight, they marched to their starting positions on the tape. It was now dawn. Their war was truly about to begin. "Zero hour" at 5:50am was suddenly announced by an earthquake-like roar. The world seemed to explode as the tremendous allied artillery and machine gun barrage roared over them. The men moved out to their destiny.

Imagine waves rolling onto the beach, explains Licameli, that was how the battle might appear. In the 3rd Battalion sector of the 107th Regiment, the first wave, consisting of Company I, from Middletown and Company L, from Newburgh, advanced by platoons and squads. Then, as their line started to dissipate, the second line of the first wave, from Companies M and K, 50-yards to their rear but already in motion, moved forward, mixing with or passing through them. They in turn were followed by the lead wave from 2ndbattalion's Company E, from Newburgh and Company H, who were then followed by Companies F and G. And behind them would be others, followed by the Australians. Wave after wave doggedly moved forward through the hail of singing lead and screaming shrapnel, to then crash against the German lines. As one faltered or fell back, another would take over.

Thomas Carroll, wounded 17 times, made it back to New York before succumbing to pneumonia in an army hospital

The rolling artillery barrage that preceded the assaulting forces crept forward at a rate of 100 yards every three minutes. It was designed to disrupt the Germans and breakup the barbed wire obstacles for the waves of soldiers who would follow closely behind. However, in the 107th sector, an unfortunate circumstance resulted in this protective barrage beginning so far ahead-over 1200 yards-as to be barely discernible as it passed harmlessly over the enemy wire and machine gun positions of the outpost line.

A concerted effort by huge British tanks, crewed by Americans, would provide some support and protection by driving through and opening lanes in the barbed wire, and by sending concentrated fire ahead of these 'waves' to allow them to move forward. However, during a battle, mishaps occur, even the most well thought out plan will have its weaknesses; the Americans driving the tanks, unbeknownst to them, drove onto British mine fields resulting in the near total elimination of that crucial support. This occurrence, plus other miscalculations, caused the 107th to have little or no protection as they crossed a mile of open terrain, a modern day version of Pickett's Charge at Gettysburg. But this time facing not just rifles and artillery, but murderous machine gun fire, immense barbed wire obstacles, and poison gas.

When the day was done, as many as 85% of the men in some companies were dead, dying or wounded. Some, like Ezra Travis, made it back to an American Casualty Clearing Station before expiring. One soldier described how, "After two more trying days and nights in our newly won positions, filled with our own and German dead, mostly in the rain, and always under shell fire, we were relieved." While many survived, some were broken physically and spiritually. They eventually learned that the line in front of the St. Quentin Canal Tunnel had been breached and American, Australian, and British forces were pouring into the German rear area and taking thousands of prisoners. Despite such a grueling day, it ended as a momentous success. When you hear Licameli explain it, there were so many factors involved, so many moving parts, that to list all of the events in this one battle, is near to impossible. However, what needs to be known is that for hour upon hour, Orange County soldiers, mostly young men in their 20's, were engaged in a daylong assault against the military might of the Axis powers. Many died that day; others in the days after from their wounds. Some died from machine gun, sniper, or artillery fire, while others slowly and painfully succumbed to the deadly poison gas. Some lingered for months. Thomas Carroll came home severely injured, by one account, wounded 17 times, and as a result of complications, died five months later from pneumonia. Without the proper protection, with many miles to go between their starting point and their objective, the heart of these soldiers never wavered.

The November 11th Armistice which brought World War I to a close is now recalled as Veterans Day, but here, 29 September will always be Orange County Veterans Memorial Day.

Walter Allison's 'Newburgh Free Academy' classmates brought his football sweater home from the battlefield after it was discovered in a pile of the fallen soldier's personal belongings. 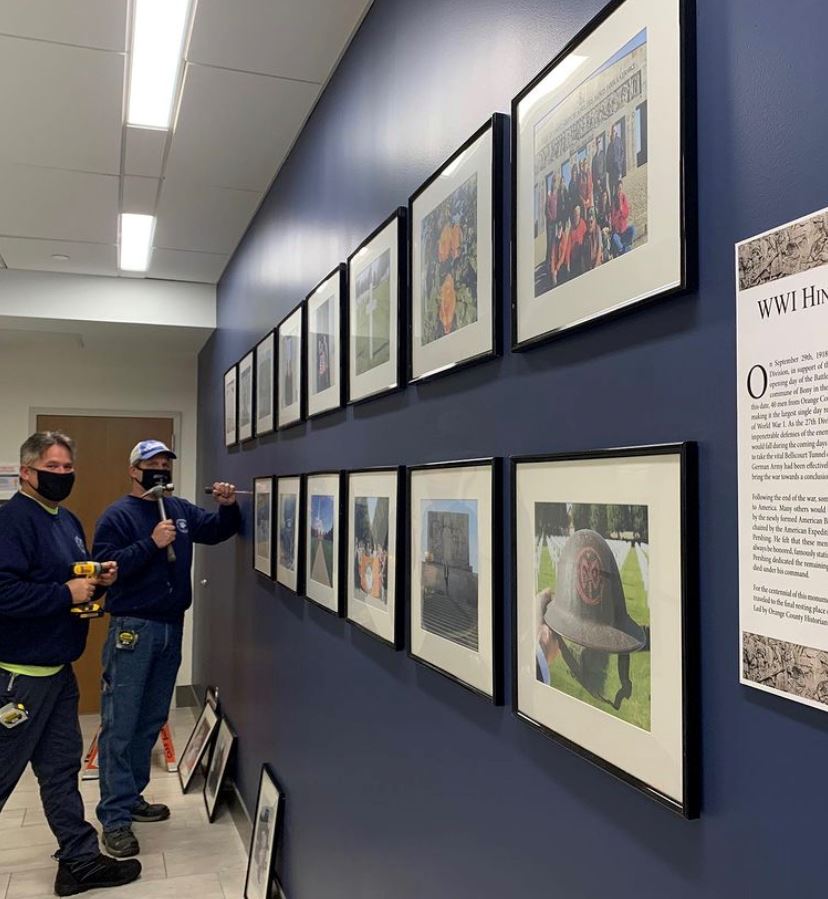